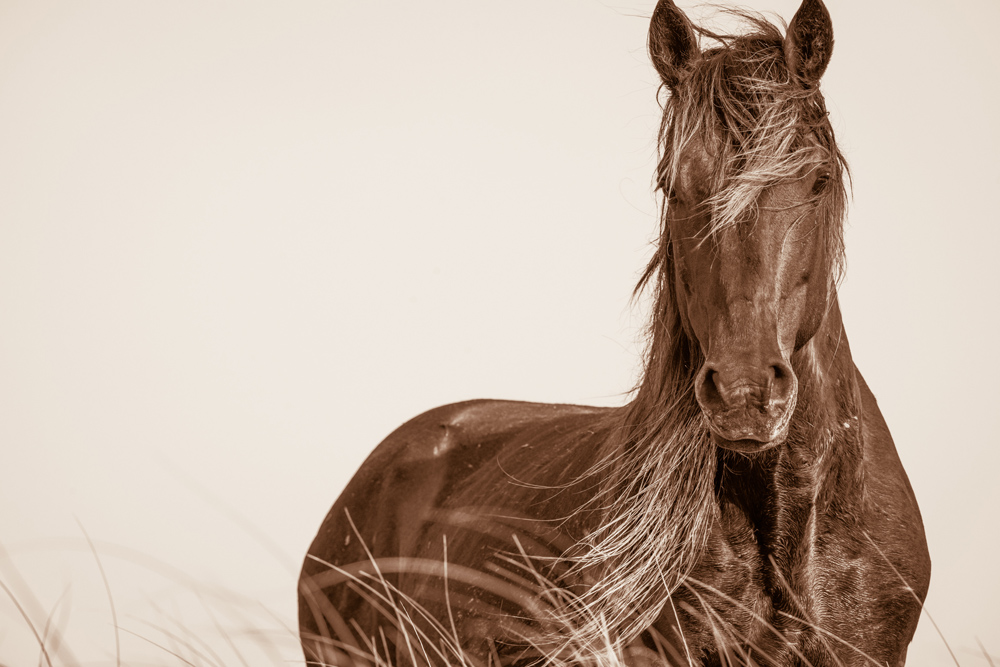 Nothing could have prepared me for the moment that permitted this image to be created. This alpha stallion had gained my attention from my earliest visits to the Outer Banks, embodying all that a wild horse is and represents. With a physically striking stature and commanding presence, he was as rugged and stunning as the environment that was very clearly his. During our encounters, I saw surrounding herds move aside as he approached a water hole with his mares and challengers quickly admit defeat from his powerful strikes. And yet, also, a gentle, almost childlike curiosity in greeting a spindly newborn colt or mentoring a young stallion in play.

One late afternoon, with the sun closing in on the horizon, he was fending off a younger stallion’s attempt at claiming his harem. With the challenger in retreat, he galloped in the direction of where his mares were last seen, climbing a nearby dune for a better view. He was soon not far from me and, with pulse quickening, I backed away in deference to his path. At the top of the dune, the stallion halted and fixed his gaze directly on me. In that instant, perfection was defined as if every detail of light, wind, and positioning had been orchestrated. In a transcendent moment, he offered this look with which I connected so deeply.

As with all things in nature, I began seeing Wavelength show signs of his 20+ years of life in the wild. In 2016, I silently conveyed my goodbye. In this image I have preserved forever how he lives in my mind’s eye.